Another Slow Day on the M40 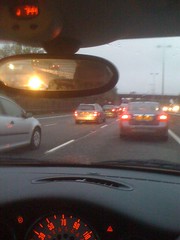 Self Portrait with Traffic
Originally uploaded by NotInventedHere.

About half an hour into the traffic jam people start to get out. The smokers are first, then the desperate start to search for a hole in the fence and a hidden spot in the trees. Once enough people are standing in the road, it's time for the bored to start walking. I have an 800 page textbook on the Building Regulations with me, so I get out of the car.

In a large traffic jam it's allowed, even expected to talk to strangers. If people didn't want to talk, they'd stay in the car with the window shut. As I walk forwards through the jam, people talk about what they're late for: Georgie Fame at Towersey, or breaking the Ramadan fast in Birmingham. As I walk back, people call out through open car windows asking for news. Nobody seems very angry: the people who caused this hold up may well be dead.

There's no Internet in a jam like this - the mobile networks give up under the strain. I have the radio, and a call from home with depressing and inaccurate predictions from the Highways Agency. I never reached the front: the accident was more than a mile away, and getting there wasn't the point of taking a walk. The radio talked about lorry fires and oil spills, and the jam stretching back 15 miles. Some people had seen helicopters landing. When we finally moved past there was nothing to see but flashing lights and a burned out car.